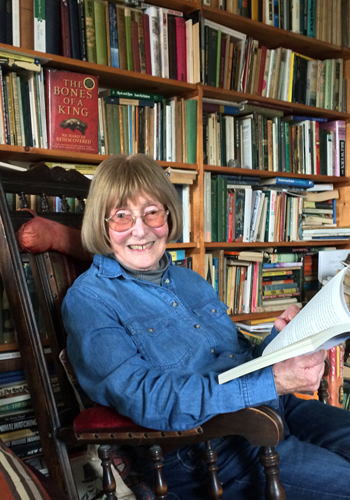 Renowned Irish author Val Mulkerns was born on 14th February 1925 and died on 10 March 2018 in her native Dublin. See:  www.ValMulkerns.com, or we invite you to click on any of the links below for some fine obituaries and tributes published after her death:

Val grew up in Dublin, and after a stint living outside Ireland, she began to write and worked as an associate editor and theatre critic of The Bell, a famed Irish literary review founded by Sean O’Faolain. Her two early novels were A Time Outworn (1951), and A Peacock Cry (1954). While raising a family in the decade that followed, she became a regular columnist with The Evening Press, and in 1978 she wrote Antiquities (André Deutsch), the first of three acclaimed collections of short stories.

The others were An Idle Woman (Poolbeg, 1980), and A Friend of Don Juan (John Murray, 1988). Two novels followed, The Summerhouse (John Murray, 1984) and Very Like A Whale (John Murray 1986). She is included in several key Irish literature anthologies, including The Field Day Anthology (Edited by Seamus Deane), and The Penguin Book of Irish Fiction (edited by Colm Tóibín). In 2018, she is the most senior author featured in the anthology, “Reading the Future: New Writing from Ireland Celebrating 250 Years of Hodges Figgis”, edited by Alan Hayes. Married to the late writer Maurice Kennedy, she edited a posthumous collection of his work,

The Way to Vladivostok, in 2000. In 2014, a Third Edition of Val’s novel The Summerhouse was published by Tara Press, and in 2016, a new collection of Val’s short fiction, entitled Memory and Desire, was published by 451 Editions. Val’s memoir, Friends With The Enemy, launched in December 2017 at The Gutter Bookshop, and covers almost 70 years of life and times in literary Ireland. Val Mulkerns is a member of Aosdána, the Affiliation of Creative Artists in Ireland.