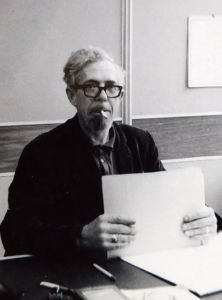 Maurice Kennedy was born in his grandparents’ house overlooking the harbour in Youghal on December 30th 1924, the middle one of three children. He spent his early years in Kildavin, County Carlow, where his mother was the village schoolmistress, but all his school holidays were spent in Youghal. Later he was educated by the Christian Brothers in Limerick, living with his father’s people in term-time. He won several scholarships, including one to Cork University. After two years there reading science he lost interest and dropped out on receiving the offer of appointment as a Junior Executive Officer in the Department of Revenue (Estate Duty Branch). He worked in Dublin as an Examiner of Estate Duties until his retirement in 1986.  Throughout his early life as a civil servant he was also a successful freelance writer, his short stories being particularly well known and widely translated. Throughout the ‘fifties and ‘sixties he was a regular contributor as literary and drama critic to The Irish Times, The Irish Press and to literary periodicals of the time. In the mid ‘fifties he edited and presented a programme called Plays of the Week for RTE radio.